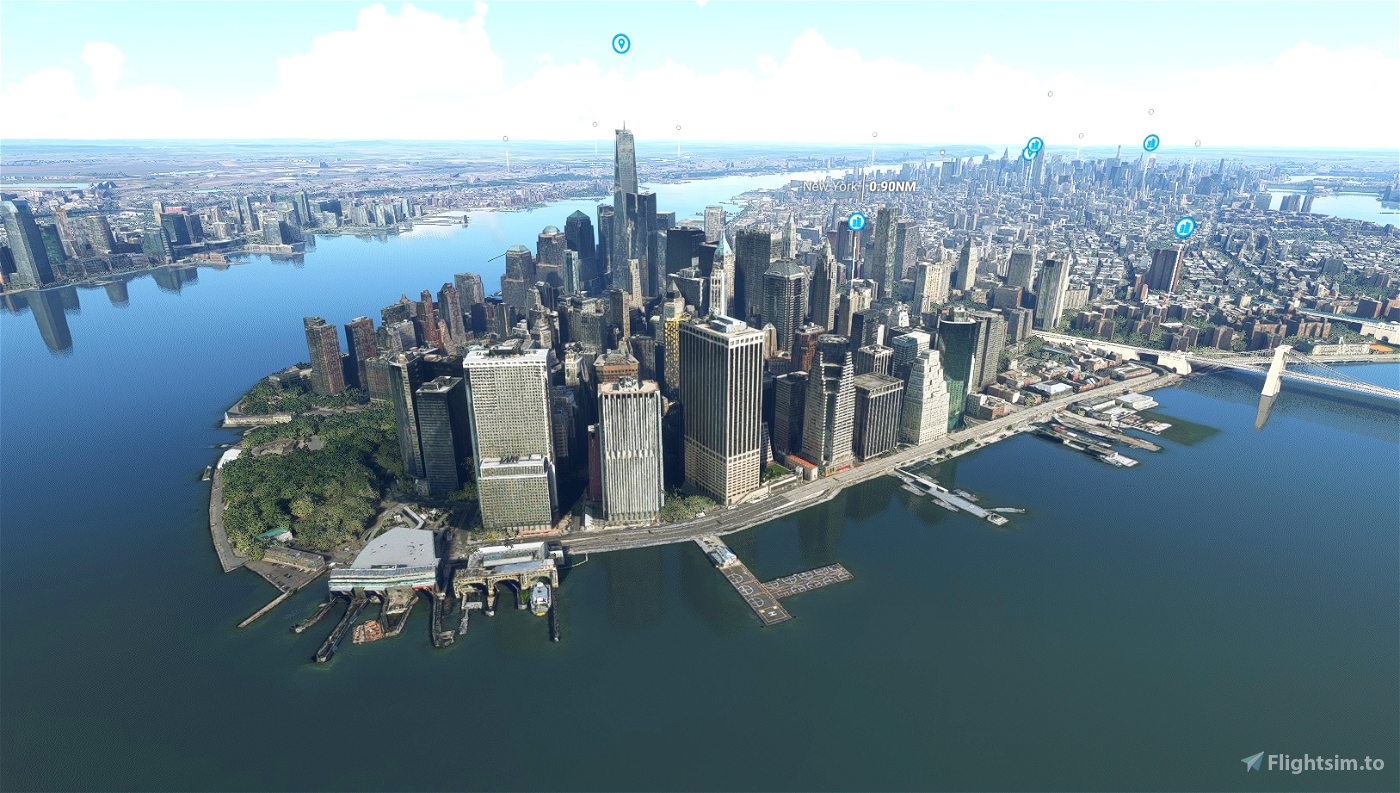 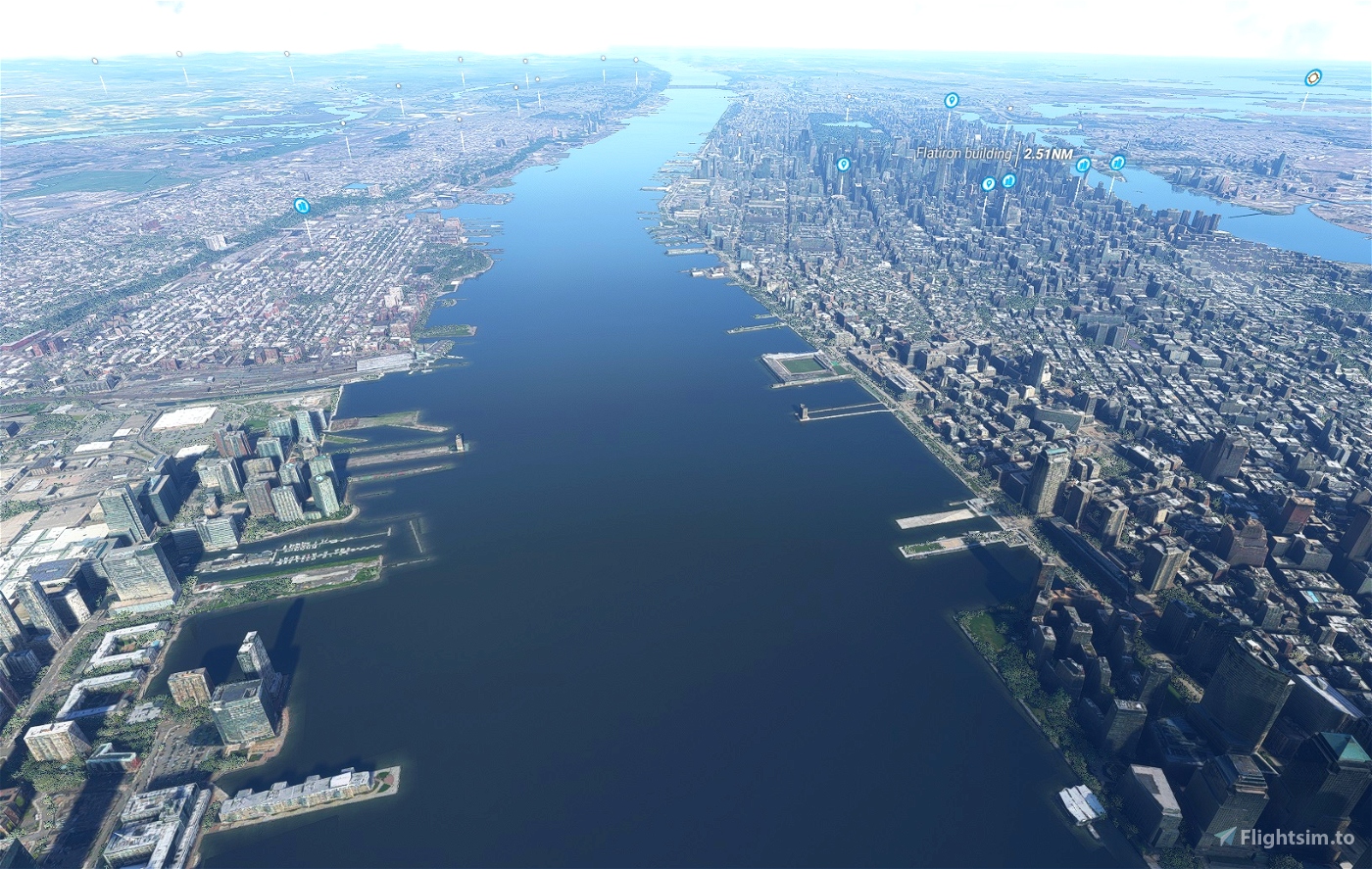 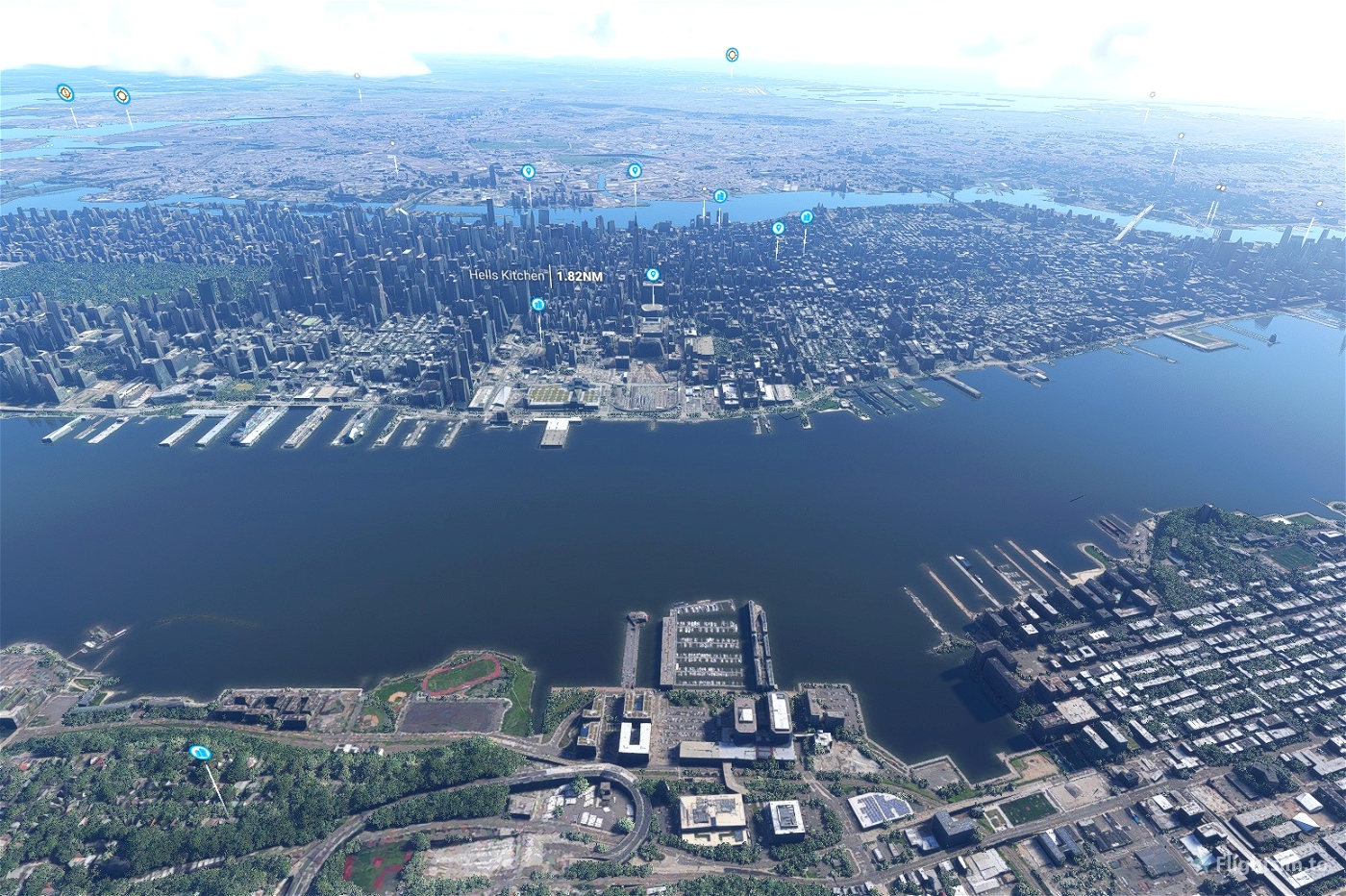 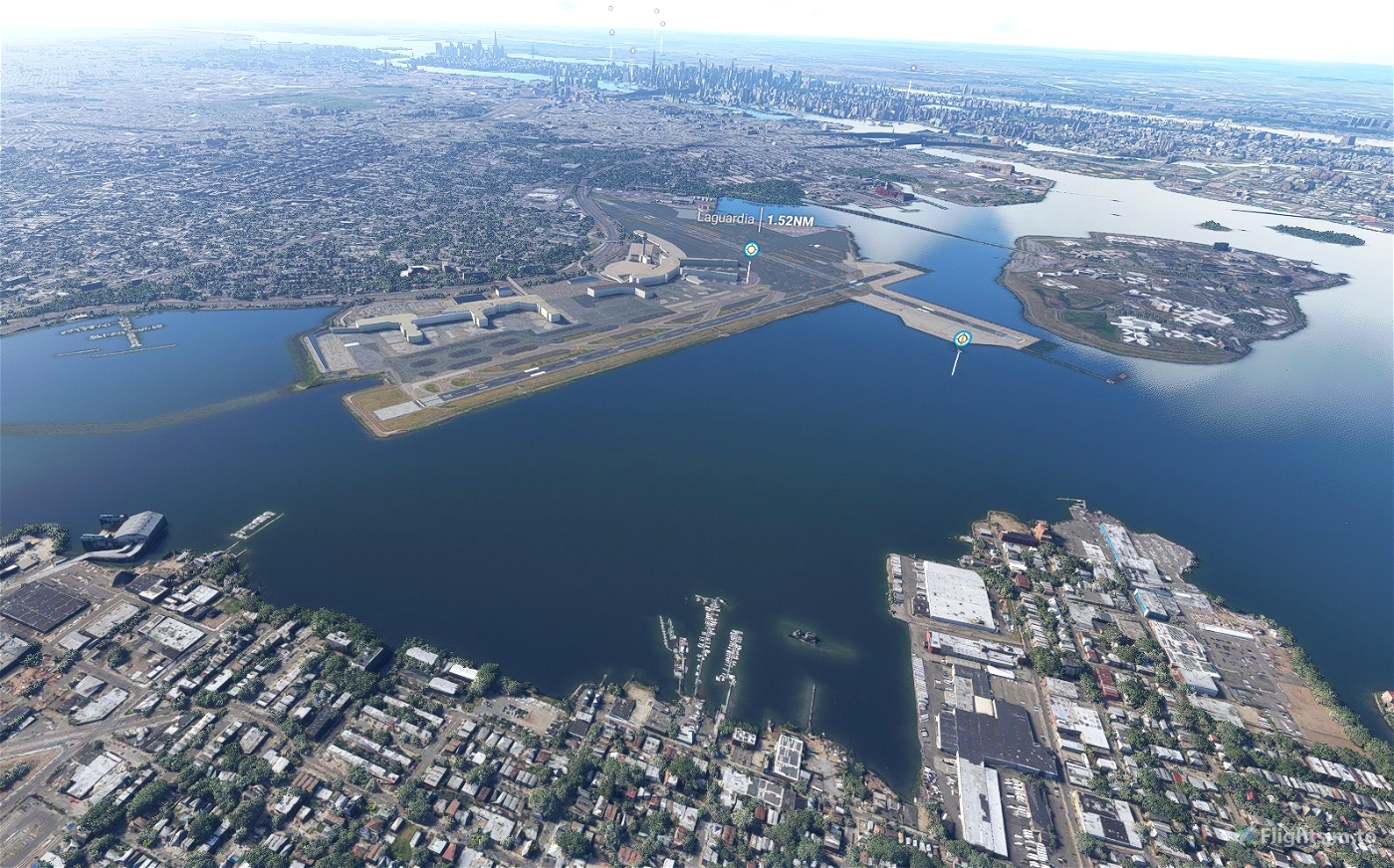 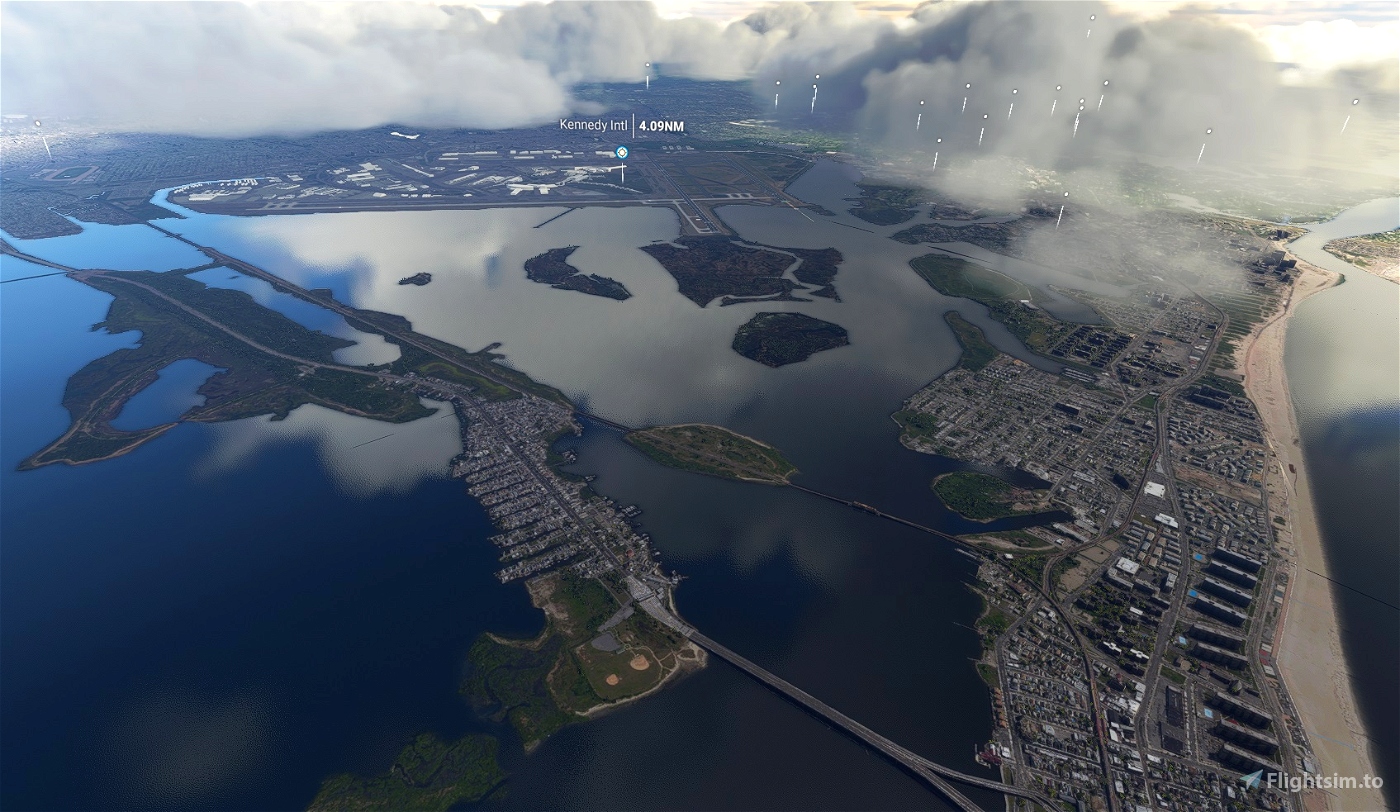 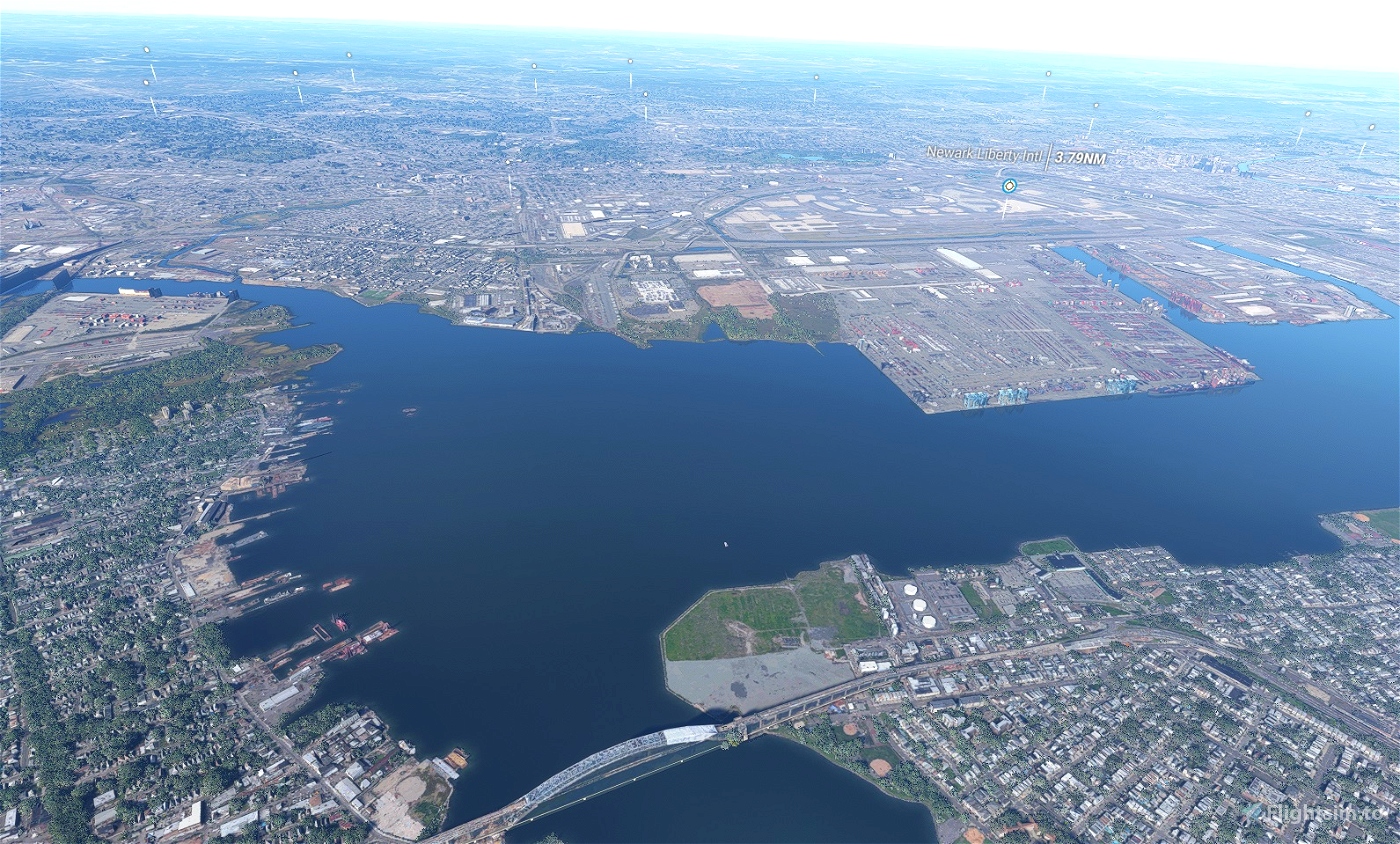 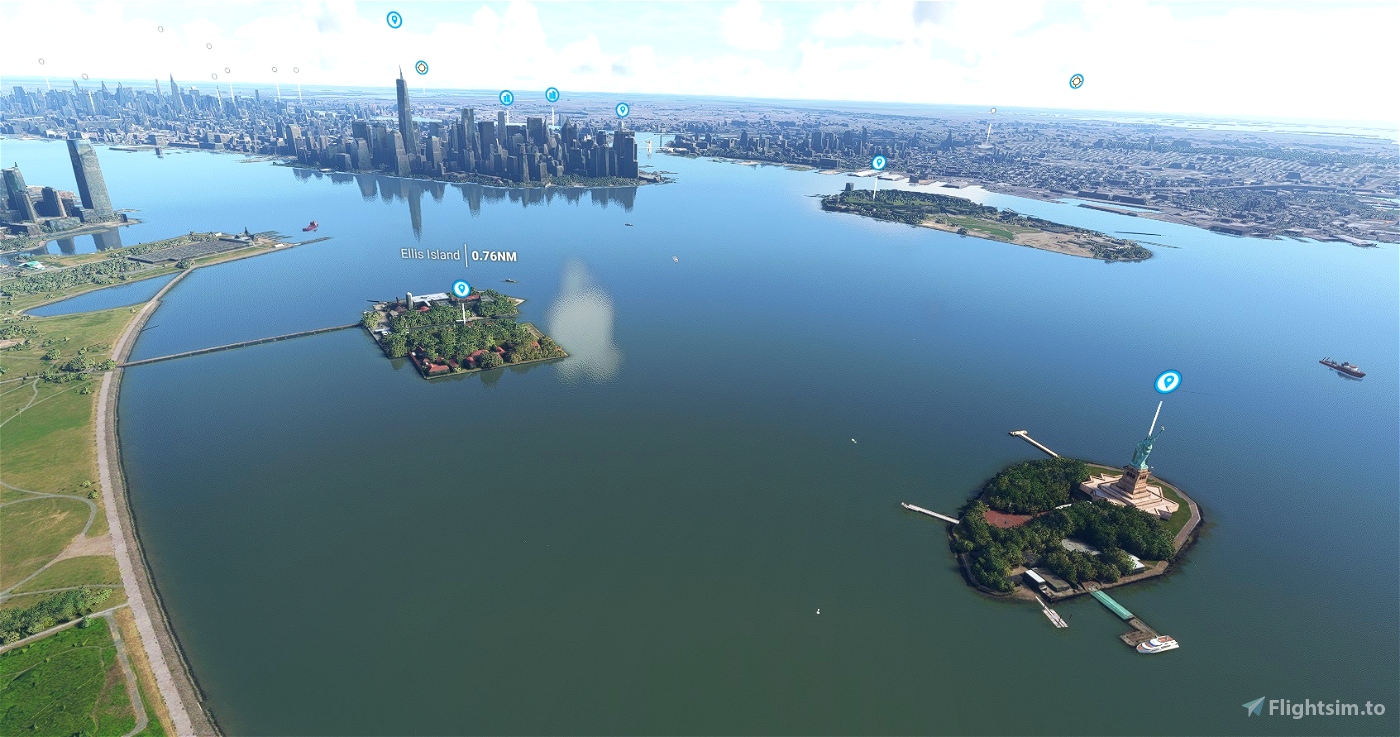 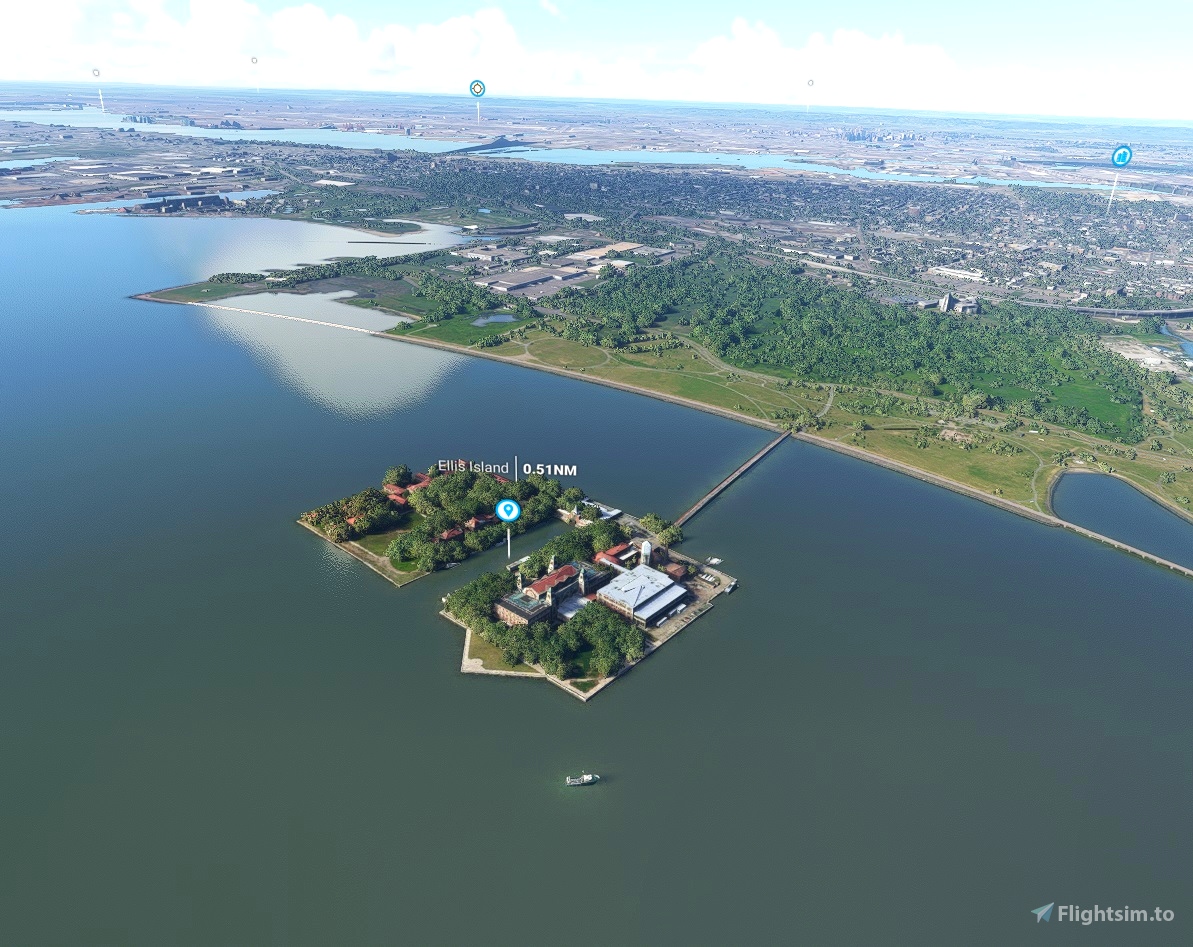 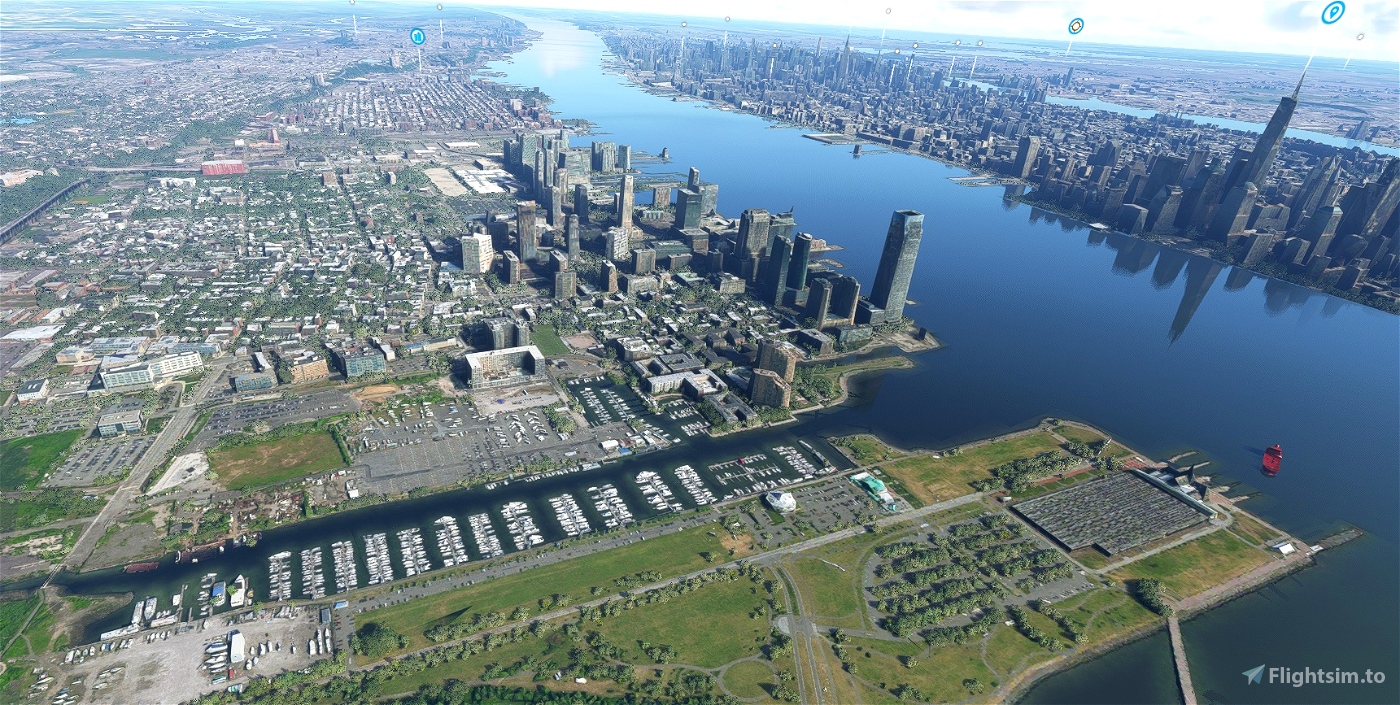 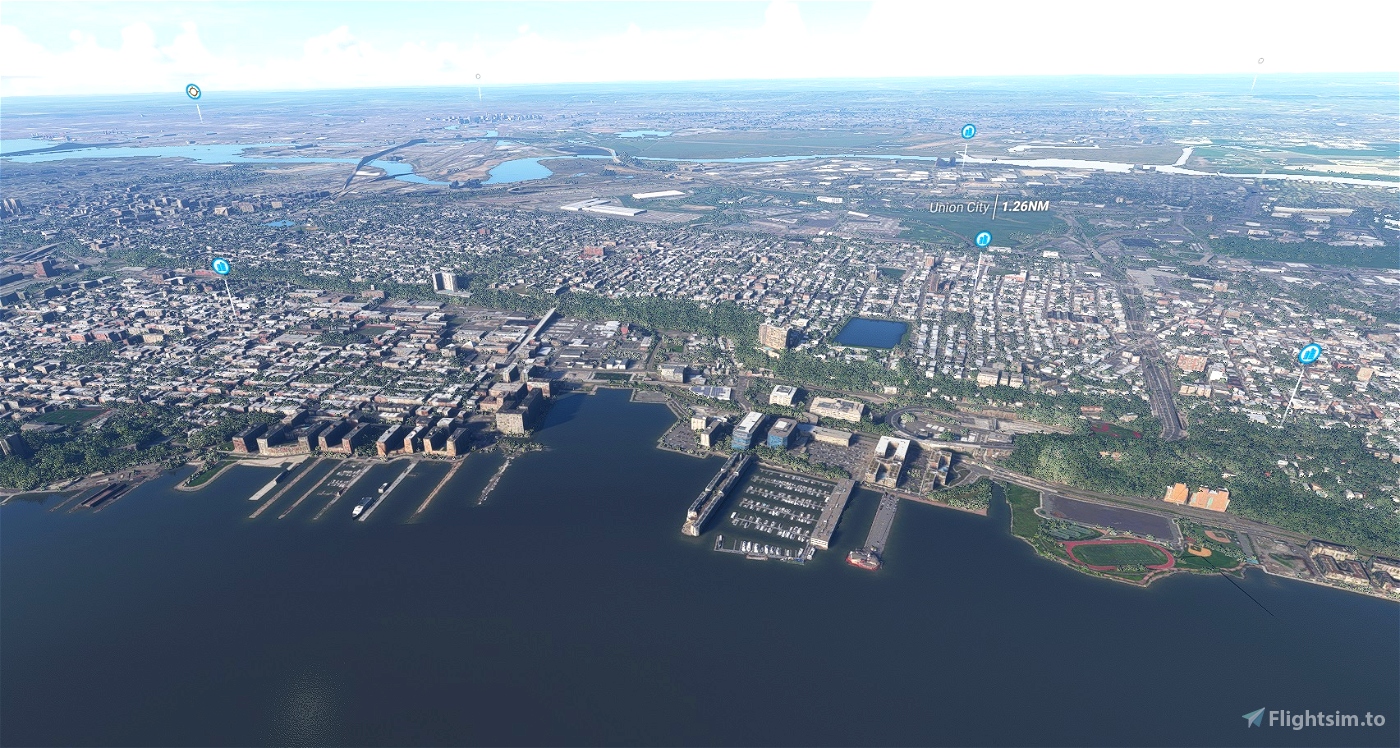 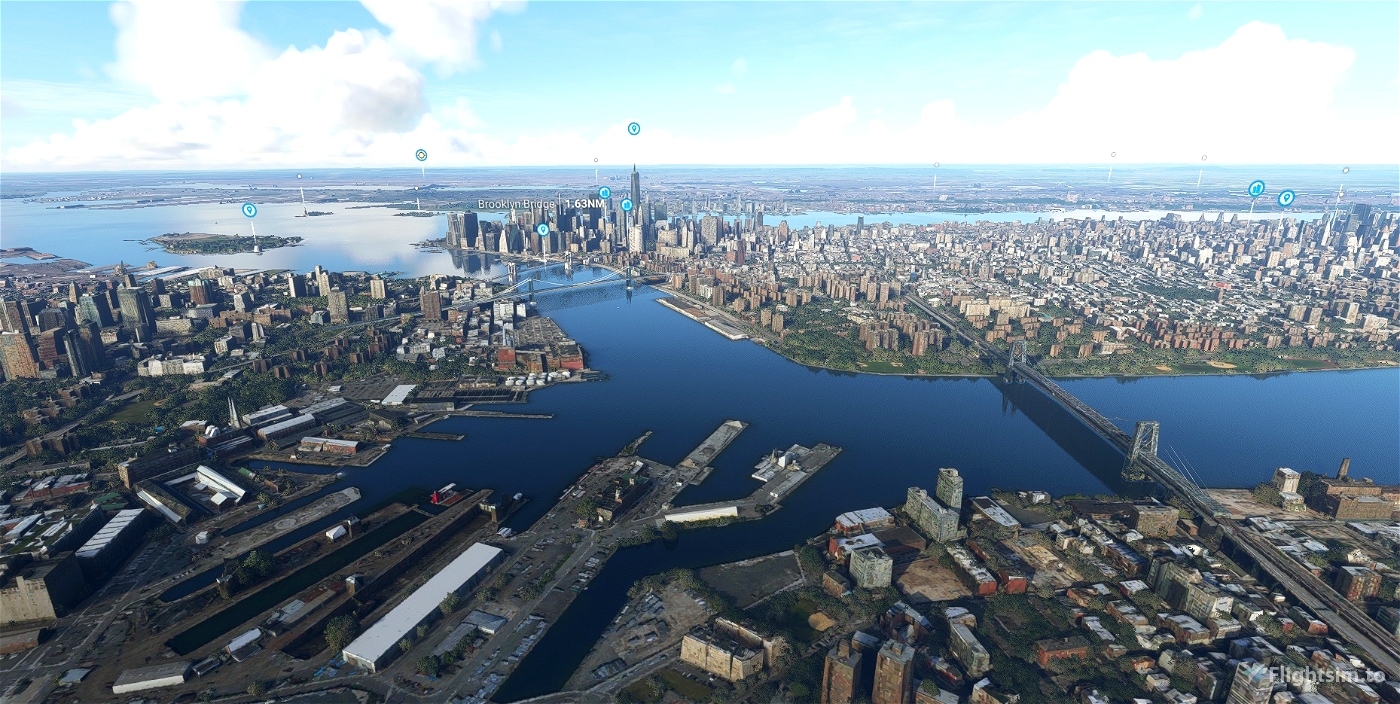 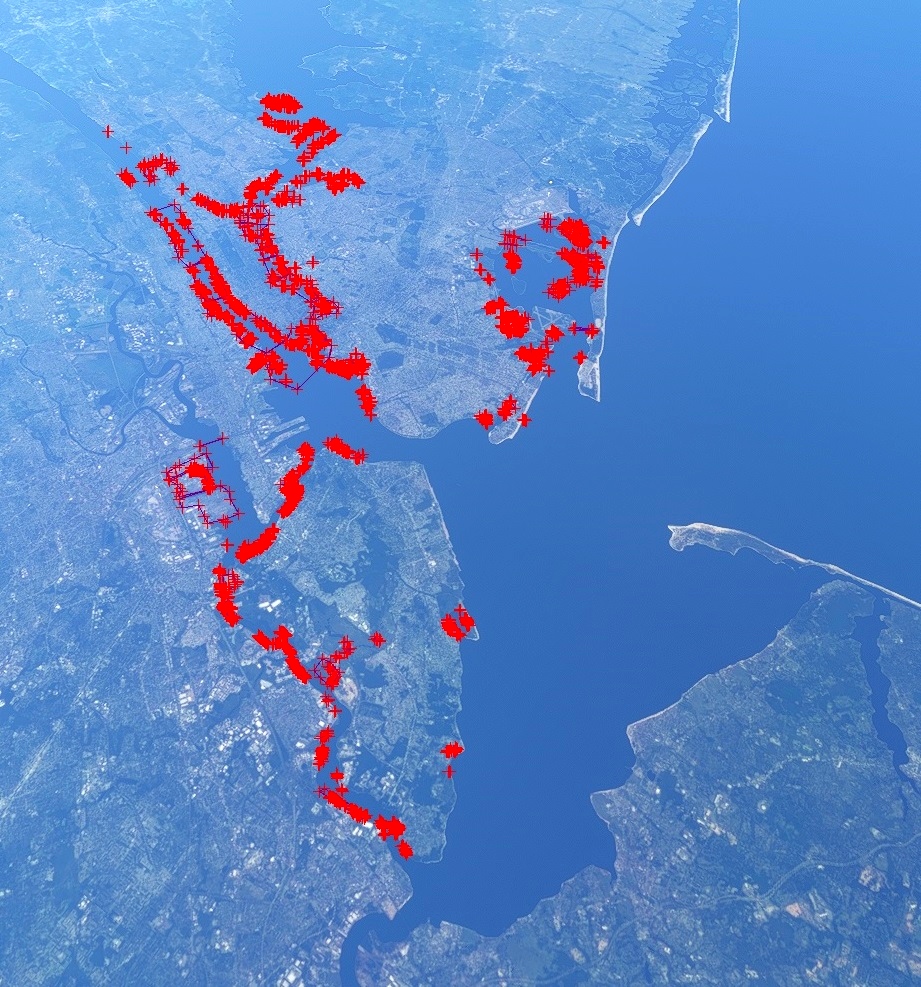 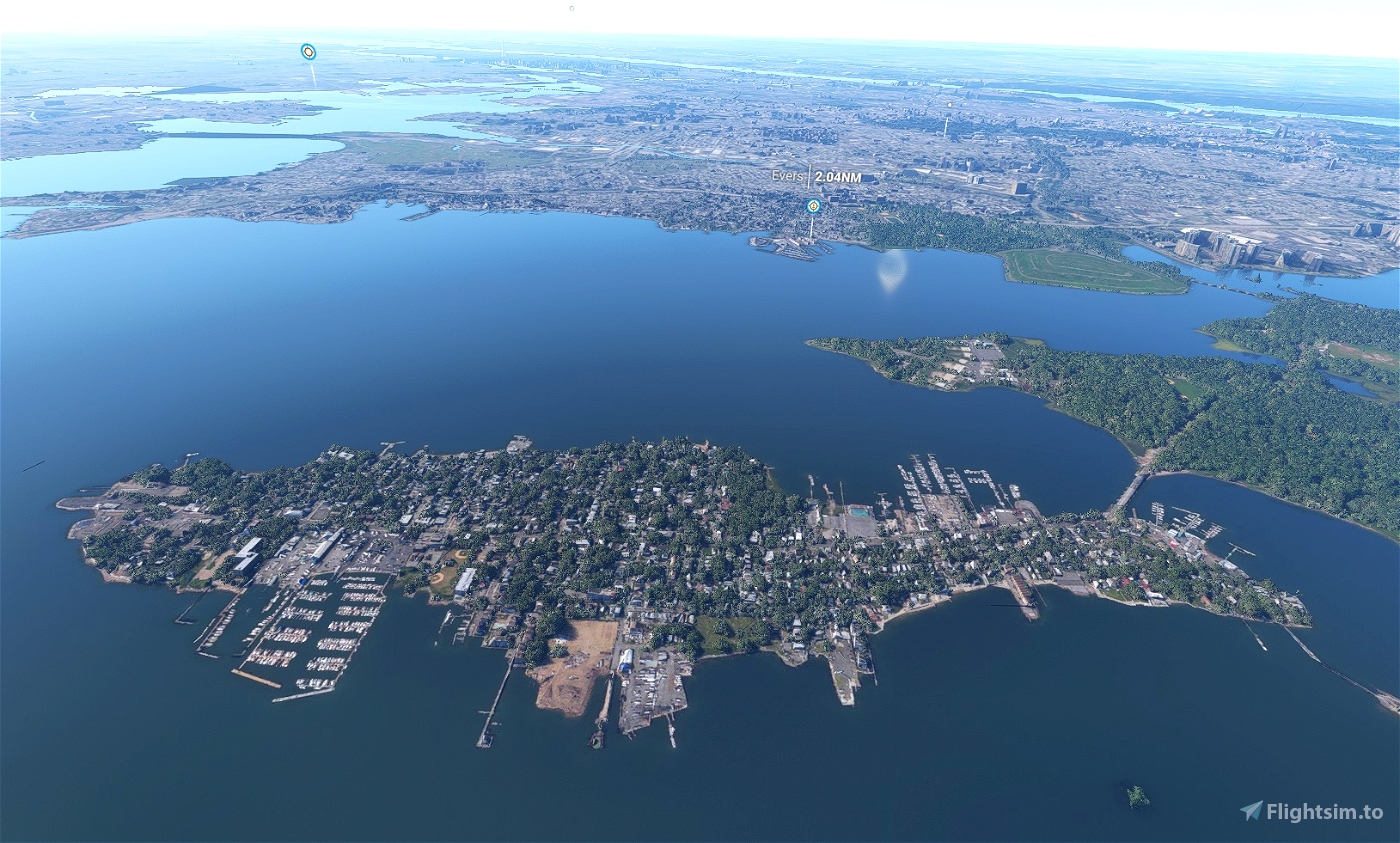 This mod applies exclusion polygons to areas covered in water in order to uncover them.  It also removes erroneously placed trees around water areas.  No scenery objects were added.

This mod fixes the following issues to the default scenery located in New York City, New York, USA. This covers as far north as the Bronx, and as far south as Staten Island.  It covers areas around Kennedy (KJFK) and LaGuardia (KLGA) airports.  I do not use other freeware or payware in the area, so I don't know if this conflicts with other third party mods.

Starting with Version 1.1 – this is now a modular installation, in order to accommodate those who might have some other 3rd-party scenery bridges.

V1.1b Hotfix Release Notes:  Do you want/need it?

For other foliage and water cleanup throughout the US, check in with FreakyD.

Create a free account now to be able to to keep track of your mods and their latest updates without struggle.

Buy me a coffee

These add-ons may be required or recommended to use.

Thanks for fixing this..it really needed it. However, in testing today, I found lots of "fault" lines including a water step near the Statue of Liberty - is this an issue on my end (I have a screen shot but can't post here)?

I saw your screenshots that you sent.

Unfortunately, those fault lines have been an issue for a while in the sim now everywhere. See here: https://forums.flightsimulator.com/t/persistent-cracks-in-ground-tiles-not-water-since-su5/439671/7

It really makes it tough to take good photos/screenshots because those darned cracks are everywhere.

Thanks for helping me fix the issue - driver roll back was needed!

Thanks Oozler. Actually if you don't have any 3rd party bridges, you need to install both folders (nycwaterfix and nycwaterfixoptionalbridges).

Ah ha - Thanks for the clarity! It's working and looking wonderful for me. Brings me a smile as I fly the H145 around.

What I mean is Can you merge all your water fixes into one download?

Thanks for your works, now New York is one of my favorite place to fly, but there is a minor issue that I still have two Rikers Island Bridge near KLGA if NY bridges installed, I hope this can be fixed in the future

Found it. I’ll take care of it!

Thanks for your dedication and diligence. Love it! much appreciated!

Thanks for the update, now it's perfect

CTD with SamScene New York, RKBridgers New York for sure

Does anyone else with this combination of addons have the same issue with V1.1?

I have SamScene NY and both RKBridgers New York and Newark mod packs installed. As an fyi I also have the NYPD Floyd Bennett field and NY helipads mods installed related to the NY area. I just flew from Floyd Bennett field up to Cross bay veterans memorial bridge. Followed to Cross bay north channel bridge and over towards Riker's. I did see the two bridges on the Francis R Buono memorial bridge (as per Jack2416). I then flew over to the East river and all the way up the Harlem river to the Hudson. I followed the Hudson on the New Jersey side past the Port Imperial/Weehawken ferry terminal (which looks great btw) and down to Ellis island. I crossed over towards Newark and along the Hackensack river up to the Goethals bridge(s) and landed at Linden airport. 25 minutes and it all ran and looked GREAT! The only caveat is that bridge at Riker's and it is awesome as far as I am concerned. Great job, brother!

Thank you for testing and confirming (again)! See Hotfix in V1.1b, covering that bridge issue.

For some reason the Holland tunnel is still exposed. I have disabled my addons SamScene and NY Bridges. The Tunnel runs two lanes right across the river immersion breaker for sure. As I fly down the river north to south I can sill see lines that go away as I approach but the Holland tunnel sticks out like a sore thumb and is totally exposed. I wonder what this could be?

Just to add as an FYI, Phogbound, I do not see the Holland Tunnel with or without this mod. I too have Samscene NY and the RKBridgers Newark and NY bridge mods. Just thought I'd offer some perspective to maybe help resolve your issue.

He contacted me and it appears to have been his Northeast Roads addon from Taburet.

I have the SamScene New York, RKBridgers New York and Newark packs. While there are no conflicts per se, I do think that some polygon exclusion around the bridges can reveal the 2d bridge image more readily underneath the mod bridges. This takes some of the immersion and negates the reason for getting bridge mod(s) in the first place. I will do more testing as I did a cursory fly around with and without along the Harlem river. Otherwise there are no conflicts exactly that I found and I really like everything else to do with the mod. Another version for people with the RKBridgers NY/Newark bridges mod would perhaps be ideal. Time to do more flying and really see what's what - there's a preliminary update.

This looks great! Thanks for all the waterfix mods. You seem to make them for all the general areas I do the vast majority of my flying so I really appreciate your efforts. Keep it up - you have a fan in me 😊

I have SamScene NYC and RKBridger's scenery packs witll this mod be ok? I will try it.

Please let us know, Thank you

Yup, the mod works well with SamScene NYC and the RK Bridges scenery 👍

Thank you, good to know

Any known conflicts with RKBridger's payware Newark or NY Bridges/Ports or NY Landmarks freeware from this site?

Why is this file hosted external?
There may be several reasons. Mostly, we have not yet been able to contact the owner of this file and ask him or her for permission to host the file on your own servers. Maybe the legitimate author does not like his file to be hosted elsewhere. Legally, we are only permitted to host files uploaded by the author himself or with explicit permission to do so.

The link is broken or not working?
Unfortunately, files which are not hosted on our servers are beyond our control. Please use the "Report" button on the bottom right of this page to report dead links and we will try to fix it. Thanks for your understanding!

Please note that we can only process copyright infringement notifications if they come from the rightful copyright holder or his legal representative. Law prohibits us from processing third-party requests if you are not the owner or copyright holder of this file.

We need additional details about the allegedly infringing content. The more details and the more accurate, the faster we will be able to process your report. We kindly ask you to understand that we cannot process copyright requests through this form, as we are required to receive such correspondence in the form of a formal complaint via email, signed by your first and last name.

Please note that it is not enough to say that a file has been stolen. We need precise and accurate proof of the infringement.

Your E-Mail must contain this information:

Please send your letter with all required information above to this address:
[email protected]